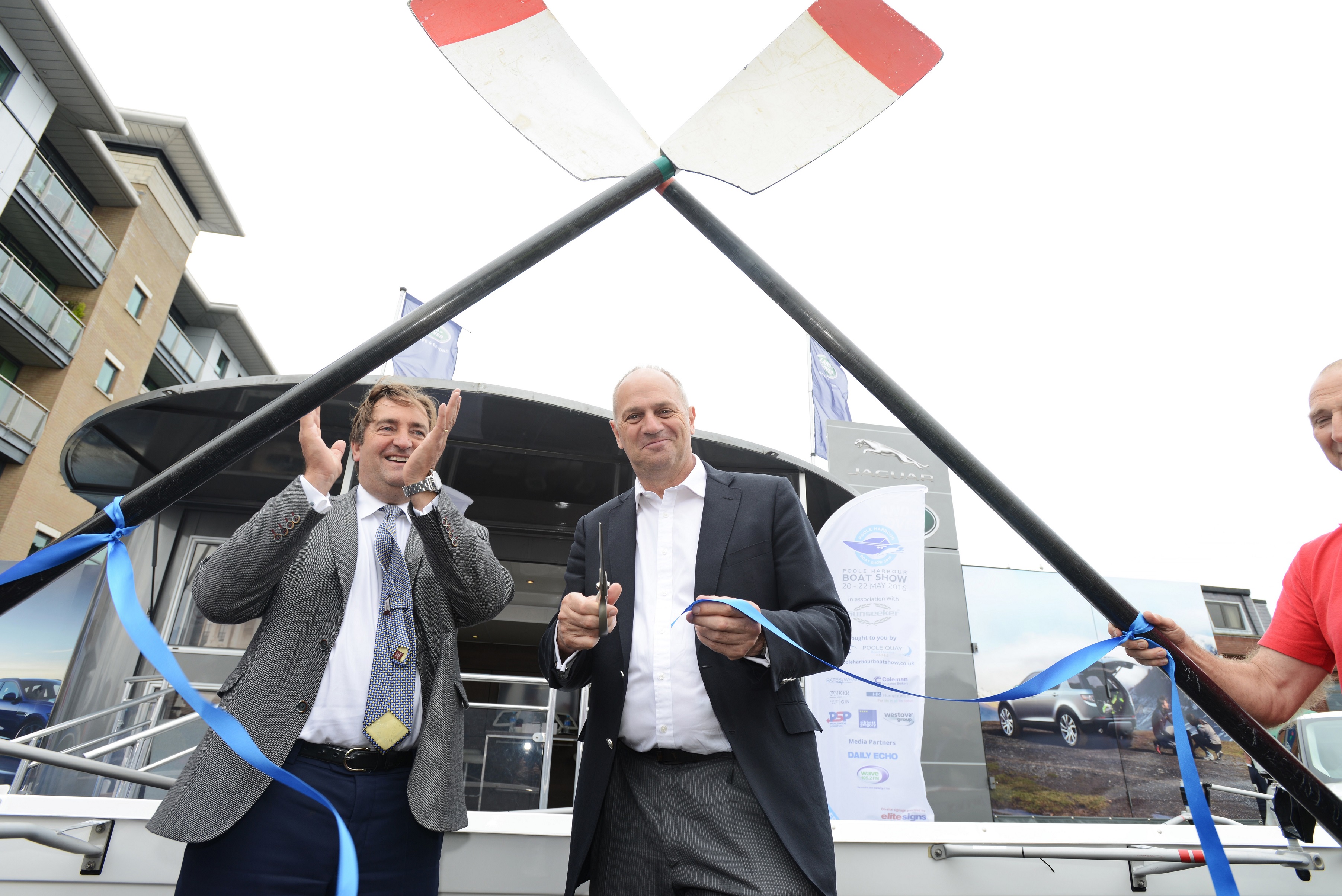 As an ambassador for Jaguar Land Rover, Sir Redgrave declared the opening of the south coast’s free boating festival on the Westover Group exhibition stand in front of show sponsors, business representatives and members of the public.

To continue opening celebrations, visitors to the Quay this evening (May 20) will be able to enjoy a spectacular fireworks display at dusk, sponsored by Sibbett Gregory, which will kick-start a full weekend of entertainment.

Organised and operated by Poole Harbour Commissioners (PHC), the second Poole Harbour Boat Show in association with Sunseeker takes place on Poole Quay and at the award-winning Poole Quay Boat Haven.  The show opens to the public at 10am on Saturday and Sunday and concludes on both days at 6pm.

As well as a wide variety of marine businesses showcasing their products and services, such as chandleries and boat manufacturers as well as clothing companies and marine insurers, there is plenty of entertainment providing family fun.

Face painting and children’s rides (charged for) will be operating throughout the weekend and live music will be scheduled from noon on both days on the ‘Sunseeker Sessions – Great British Performance’ stage. Bands performing include The Mighty Trumpet Company, Bonsai Pirates, Harry Hammersmith & the Flyovers, and the Sunseeker Renegades.

The Pelican of London tall ship will be moored alongside the quay during the weekend and will be accessible for the public between 12pm and 4pm. The Cirdan Sailing Trust’s Queen Galadriel will also be open to the public throughout the weekend.

A variety of waterborne demonstrations will also be taking place on both days:

10:00 until 16:30 – sailing taster sessions will be on offer free of charge to the public from Poole Quay Boat Haven

For more information on Poole Harbour Boat Show and for a full list of exhibitors please visit http://www.pooleharbourboatshow.co.uk/.

Countdown to Poole Harbour Boat Show in association with Sunseeker

Final preparations are underway before the south coast’s free boating festival, the Poole Harbour Boat Show in association with Sunseeker, anchors itself on Poole Quay from Friday May 20 to Sunday May 22.

On Friday May 20, from 1pm to 8pm, quayside stands will be open to the public however access to the exhibiting boats in the marina will be restricted to press and trade only.  Organisers Poole Harbour Commissioners are honoured to welcome Sir Steven Redgrave to officially open the three day show.  Having set out to win three Olympic gold medals at the beginning of his career, Sir Redgrave went on to win an incredible five golds in five successive Olympic Games from 1984 to 2000.  Now an ambassador for Jaguar Land Rover, Sir Redgrave will make an appearance on the Westover Group stand on Friday afternoon between 3pm and 4pm.

On Friday evening, visitors to the Quay will be able to enjoy a spectacular fireworks display at dusk, sponsored by Sibbett Gregory, and this will kick-start a full weekend of free entertainment.

On Saturday 21 and Sunday May 22, between 10am and 6pm, with open access to all, the action continues and a central entertainment feature will be the show’s music stage named ‘Sunseeker Sessions’ which will showcase great British performances with musical talent from across the region. Confirmed acts include the Sunseeker Renegades, Bonsai Pirates, Quinns Quinney, Harry Hammersmith and the Flyovers, and Harpin On.

On-the-water activities include a junior RIB slalom, dinghy racing and Poole Gig Rowing Club races as well as RNLI and PHC vessel demonstrations. Visitors will also have the opportunity to take to the water themselves on Saturday and Sunday in R19 or J24 sailing dinghies as taster sessions will be available from Poole Quay Boat Haven between 10am and 4.30pm.

Gibbs Sports will also be demonstrating its amphibious vehicles.  The Quadski, the world’s first amphibious sports car, reaches speeds of 45mph on both water and land and transitions between them in seconds.  The four-wheel drive Humdinga is designed to access remote and hostile terrain and is capable of 100mph on land and 40mph on water.  Both vehicles will be displayed on Saturday and Sunday at 11am and 2pm.

Jim Stewart, chief executive at Poole Harbour Commissioners, says: “There will be so much taking place at this year’s Poole Harbour Boat Show in association with Sunseeker it will be an event not to be missed.  Packed with opportunities to discover a variety of boats, enjoy a host of entertainment and watch on-the-water displays there is so much for everyone.  With the support of many of the region’s best marine and watersports professionals and associations, we are really looking forward to what we anticipate will be a fantastic second year of the show.”

For more information on the Poole Harbour Boat Show in association with Sunseeker, and for a full list of exhibitors, please visit http://www.pooleharbourboatshow.co.uk/ 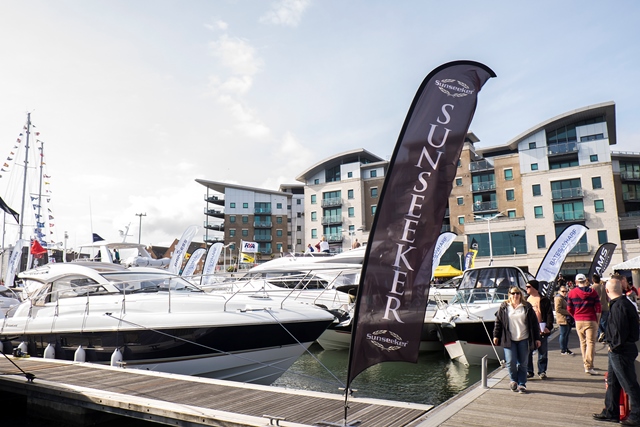 Preparations are underway for next year’s Poole Harbour Boat Show. Poole Harbour Commissioners (PHC), the organiser behind the event, has begun booking exhibitors, arranging road closures and having discussions with some well-known businesses regarding sponsorship.

With more opportunities to get involved for 2016, and 2015 sponsors interested in returning for a second year, PHC is encouraging organisations to get in touch and discuss the possibilities of becoming a sponsor of the Poole Harbour Boat Show.

The debut show featured family-focused entertainment, alongside hosting a variety of marine-related businesses, and live music throughout the weekend.

The 2016 Poole Harbour Boat Show will see an additional day added to the event and will take place on Friday 20 through to Sunday 22 May 2016.

“2016 will see us expand the event across three days due to an increased interest following a positive weekend of sales, with those in the industry firmly believing that we made waterborne activities accessible to a new audience.”

He added: “We look forward to working with a host of existing and new sponsors, with a view to providing a brilliant event which will draw in visitors from across the country.”

The event is also supported by Poole Tourism which will include the show in its annual events programme and has scheduled the dates in May to co-ordinate it around other summer events on Poole Quay.

Following the huge success from its inaugural event, the organisers behind Poole Harbour Boat Show are proud to announce it has been shortlisted for the Tourism Event of the Year category at the 2015 Dorset Tourism Awards.

Poole Harbour Boat Show took place over two days in May and exceeded organisers’ expectations with visitor numbers resulting at a level of 50 per cent over what was predicted. In excess of 15,000 visitors were attracted to the regional boat show.

Organised by the team at Poole Harbour Commissioners (PHC) and Poole Quay Boat Haven, more than 60 exhibitors used the show as a platform to display their products. Boat enthusiasts gathered onto the pontoons to look at the variety of marine-related businesses, including some big names such as Sunseeker, Princess, Fairline, Windy, Stingher Ribs, Bayliner and Sealine.

Adding to the day out experience were the popular attractions of a regional boat show including a range of stalls and various activities to keep the crowds entertained including on-the-water displays, tall ships, live music, children’s entertainment and a spectacular firework display on the Saturday evening.

Britain’s Paralmypic medallist Helena Lucas MBE was the guest of honour on the Sunday where she met with guests and showcased her gold medal. Helena, who won gold in the London 2012 Paralympic Games and has become the first Great Britain athlete to be selected for Rio 2016, hoped the boat show would encourage more people to get out on the water.

Chief executive of PHC, Jim Stewart said: “Being shortlisted for the Tourism Event of the Year category is well-deserved recognition for the team’s efforts in organising the inaugural Poole Harbour Boat Show. We were delighted with the success of this year’s show and we are now in the process of planning the event for 2016.”

For 2016, Poole Harbour Boat Show will be extended to three days and will take place on May 20 to 22.

The PHC team will be heading to Bovington Tank Museum on October 15 for the awards evening.

Poole Quay Boat Haven was a winner at this year’s Southampton Boat Show after being announced the UK’s number one Marina/Harbour at the 2015 Sailing Today Awards.

The Poole marina, which is run by Poole Harbour Commissioners (PHC), was shortlisted among four other finalists with the casting vote being chosen by the public. Thousands of the magazine’s members voted for their favourite boat, sailing kit and destination, with the winners being acknowledged at a prestigious champagne reception on the opening day of the Southampton Boat Show.

The award-winning boat haven was recognised for its coveted five Gold Anchor achievement from The Yacht Harbour Association and for its organisation behind this year’s inaugural Poole Harbour Boat Show, which attracted more than 15,000 visitors.

Marina manager John Binder, who accepted the award, said:  “We are very proud of this award and to be recognised for our efforts. It has been a busy year with the first-ever Poole Harbour Boat Show and everyone at the marina should be proud of their achievements, this is such great recognition. Thank you everyone for your support.”

Editor of Sailing Today, Sam Fortescue added: “With so much investment going into providing new berths and new services in marinas across the UK, this was always going to be a close-run category.

“The marina has recently won five Gold Anchor status and just launched its own boat show. Located in the stunning natural surroundings of Poole Harbour, close to the historic centre of a town that is undergoing major regeneration, it makes an excellent spot for short-term berthing.”