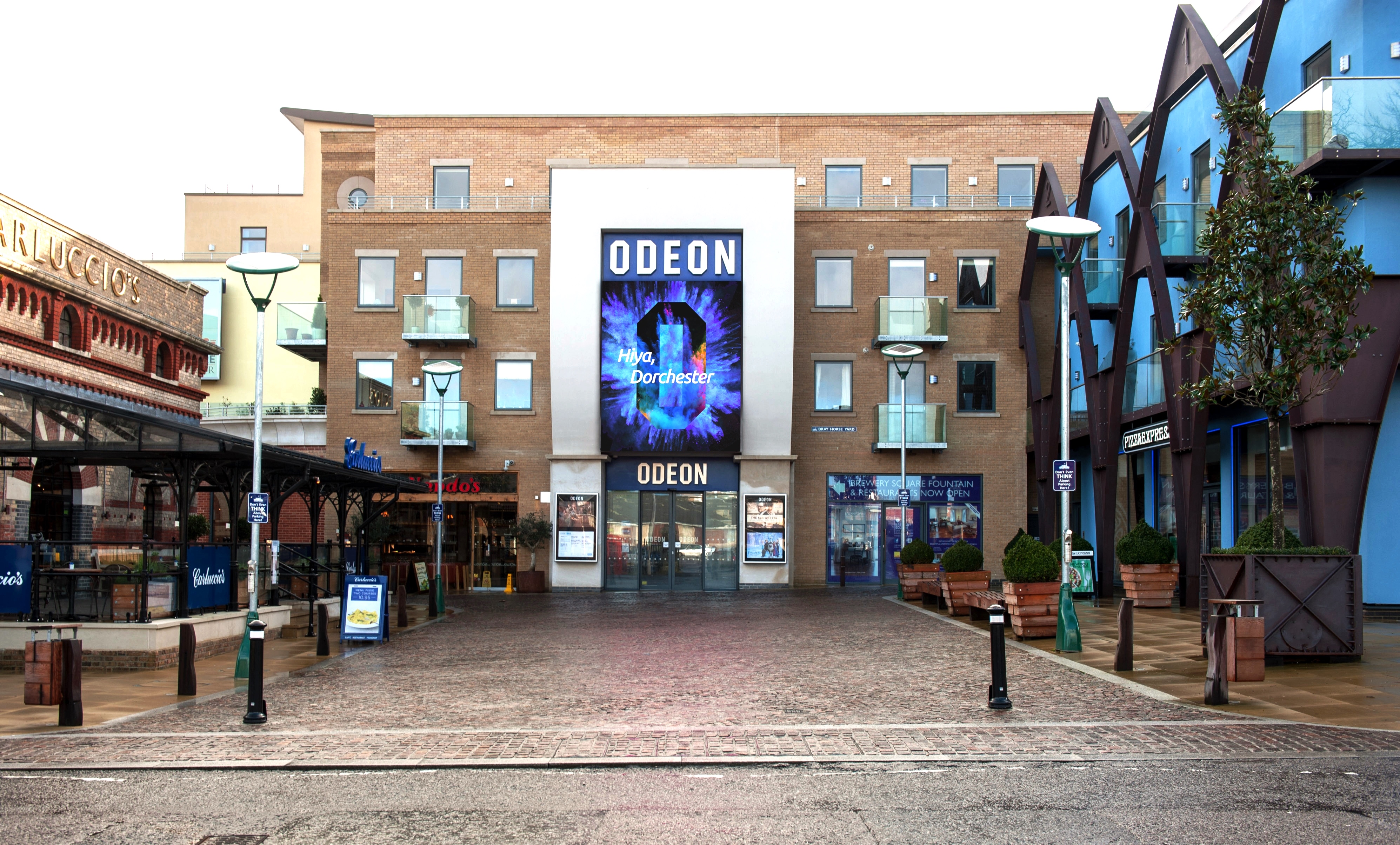 ODEON Dorchester has a busy autumn and winter season ahead, with a variety of alternative screenings planned, including National Theatre Live productions, Royal Opera and a selection of documentaries.

The season begins on Thursday September 1 with the NT Live screening of Terence Rattigan’s ‘The Deep Blue Sea.’ Rattigan’s masterpiece features Helen McCrory playing what is held as one of the greatest female roles in contemporary drama. Her affair has devastating consequences, leading to a suicide attempt.

The new season continues with footage live from the red carpet in Ron Howard’s ‘The Beatles: Eight Days a Week – The Touring Years’ on Thursday September 15. This new documentary compiles interviews, anecdotes and music from the iconic rock band.

Cosi Fan Tutte will be broadcast live from The Royal Opera House on Monday October 17 in a new production of Mozart and Da Ponte’s opera on the nature of love. Conducted by Semyon Bychkov, the production features a cast of young and up-and-coming talent, including American soprano Corinne Winters.

To round off this year’s alternative screenings, The Nutcracker by the Royal Ballet will be shown on Thursday December 8. Captivating generations of audiences around the world, Tchaikovsky’s ballet tells the story of a young girl that disappears into a magical world, after opening a new present on Christmas Eve.

Alan Escott, general manager at the ODEON Dorchester, said: “We are looking forward to welcoming fans of our alternative screenings back to the cinema after a busy summer of blockbusters. We have screenings lined up from National Theatre Live and The Royal Opera House. The season will be complemented by a great selection of documentaries.”

Tickets start from £10, with family tickets available. A full list of screenings can be found online or in the cinema, with new showings being added regularly.

The ODEON Dorchester is situated within the Brewery Square development and tickets can be booked by calling 0871 224 1891 or visiting www.odeon.co.uk/cinemas/dorchester/214.

Following the phenomenal success of a charity screening of Frozen for Julia’s House, the ODEON Dorchester is due to host two more charity screenings of the Disney hit on September 12 and 19 at 4pm for the Dorset hospice, which is dedicated to children with life-limiting conditions.

Children’s party planners Fairytales Parties, have kindly agreed to support the events by bringing the film’s stars Elsa and Anna to the screenings to meet the audience, where children will have the opportunity to have their pictures taken with them.

Alan Escott, general manager at the ODEON Dorchester, said: “Due to the amazing response the charity screening of Frozen has received, we are delighted to be hosting a second and third screening in aid of Julia’s House in the autumn.”

Donna Sibley of Julia’s House, said: “We are very excited to be doing a further two showings of the Frozen sing-a-long film, and we are really grateful to the Odeon for making this possible. We received wonderful feedback from the showing in July, and we are looking forward to doing it all again!”

Tickets cost £5.00 and due to the previous high demand, these are available on a first come first served basis from Donna on 01202 644220, with all proceeds going to Julia’s House.

This autumn sees a wealth of A-list talent gracing the screens of ODEON Dorchester, with an eclectic series of live alternative screenings taking place.  With everything from opera and musical theatre, to events at the London Literature Festival scheduled to be broadcast from all over the world, there are screenings to suit all interests.

National Theatre Live has announced an international broadcast of Great Britain’s production of Euripides’ powerful Greek tragedy MEDEA, in a new version by Ben Power. Directed by Carrie Cracknell and starring Helen McCrory in the title role, the production will be broadcast live from the National’s Olivier Theatre on Thursday September 4 at 7pm.

For one night only on Thursday September 18, ODEON Dorchester will screen one of the world’s most spectacular opera events direct from Australia. The Handa Opera will perform a modern retelling of Puccini’s tale of love and honour, Madama Butterfly, captured live from the waters of the Sydney Harbour on a magnificent floating stage.

Fans of Stephen Fry can get a sneak preview of his latest volume of memoirs, More Fool Me, on Wednesday October 1 at 7:15pm. His previous memoir, The Fry Chronicles, was the biggest 2010 autobiography in the UK, selling more than one million copies worldwide, and his latest book is a heady tale of the late eighties and early nineties in which Stephen, driven to create, perform and entertain – burned bright, partied hard and damned the consequences. Stephen Fry Live: More fool me offers a rare opportunity to see the multi-award-winning comedian, actor, presenter, writer and raconteur on stage live.

To round off the month of live screenings, award-winning Billy Elliot The Musical Live will be screened live from London’s West End on Monday September 28 at 2pm and 7pm. Based on the Academy Award® nominated film, Billy Elliot the Musical has won the hearts of millions since it opened in London’s West End and has gone on to captivate audiences around the world, winning more than 80 theatre awards along the way, including Tony Awards® and five Olivier Awards.

Alan Escott, general manager of the ODEON Dorchester, says: “We are eagerly anticipating the new season of alternative screenings this autumn and are proud to be bringing such an impressive programme to the people of Dorchester and the surrounding communities.  How often can you say you’ve had the Australian Opera perform ‘live’ on your doorstep!”

The ODEON Dorchester is situated within the Brewery Square development and tickets can be booked by calling 0871 224 1891 or visiting www.odeon.co.uk/cinemas/dorchester/214/.  Further information about each production can also be viewed on the website.

ODEON Dorchester will be offering fans of global super-band One Direction the chance to see their ‘Where We Are’ concert on the big screen on October 11 at 1pm, 3.30pm and 6pm and October 12, at 1pm.

One Direction: Where We Are – The Concert Film will feature never before seen footage of all of One Direction’s biggest hits in digital surround sound, a 15 minute interview with Niall, Zayn, Liam, Louis and Harry, plus backstage tour footage.

The high-definition cinematic experience was recorded in the iconic San Siro Stadium in Milan and will be aimed at those who were not lucky enough to catch the band’s epic ‘Where We Are’ world tour. There are under 700 tickets available and now on sale from £7.50 each.

Alan Escott, general manager at the ODEON Dorchester, said: “We are thrilled to announce the weekend screenings of One Direction: Where We Are – The Concert Film, as they give fans of One Direction the chance to see their favourite band, right here in Dorchester.”

Alan added: “With tickets only just released for general sale, we anticipate a sell-out response for the opportunity to see the biggest band in the world, and it is a great chance for us to show off our top-level cinema”.

To add some pop star magic to the occasion, ODEON Dorchester will be turning the cinema into a One Direction party for the weekend of the screenings in October, with themed balloons and music in the foyer. What’s more, everyone who attends the screening will receive a free One Direction goody bag.

ODEON Dorchester is situated within the Brewery Square development and tickets can be booked by calling 0871 224 1891 or by visiting ODEON Dorchester’s website www.odeon.co.uk/cinemas/dorchester. Further information about the screenings will be found on the website.

During the last 12 months thousands of cinema-goers have descended on the ODEON Dorchester based in Brewery Square to catch the latest movie blockbusters and alternative screenings.

With attendance figures up by 45 per cent during this period compared to 2012 and the cinema having the highest growth in attendance across the whole group in the UK, the Dorchester cinema team is looking forward to another bumper few months.

The ODEON Dorchester puts this footfall success down to the variety of content shown on its big screen, which includes live broadcasts of National Theatre, Royal Ballet and Royal Opera House productions as well as the latest movies, and its pricing structure which sees ticket prices at £2.00 on a Tuesday and start from £3.00 on all other days.

The live broadcast of the National Theatre’s production of War Horse in February proved to be one of the most popular screenings, with more than 420 people watching the production in the cinema’s three screens.

Following this success, the cinema is looking forward to an exciting six months with an array of alternative screenings.  The National Theatre’s production of A Small Family Business by Olivier award-winning playwright Alan Ayckbourn, Puccini’s opera Manon Lescaut, Monty Python Live and The Royal Ballet’s recital of Alice’s Adventures in Wonderland are just a few of the classic productions due to be screened at the ODEON Dorchester from June until the end of the year.

Alan Escott, general manager at ODEON Dorchester, says: “We would like to thank our customers for their loyal support.  We aim to provide a first-class cinema experience at a competitive price and we are pleased that this is being received extremely well by those living in Dorchester and the surrounding communities.

“With our excellent bar facilities, our cinema makes a perfect evening for theatre and film viewing.”