Since 1989, Timothy Everest has been fusing traditional bespoke tailoring with a contemporary eye for creative design, dressing some of the biggest names on the planet.

The creative minds within this family cover a breadth of skills together, with Carina’s PR expertise and Alyssia’s extensive background in graphic design.

Timothy and the daughters leading the next generation of the business join us on It Runs In The Family, sharing the ‘shorthand’ dynamic unique to family businesses, how they combatted the negative perception of British tailoring, and a more-than-healthy handful of remarkable namedrops – from Tom Holland to Tom Cruise, J-Lo to Tilda Swinton, and so many more… 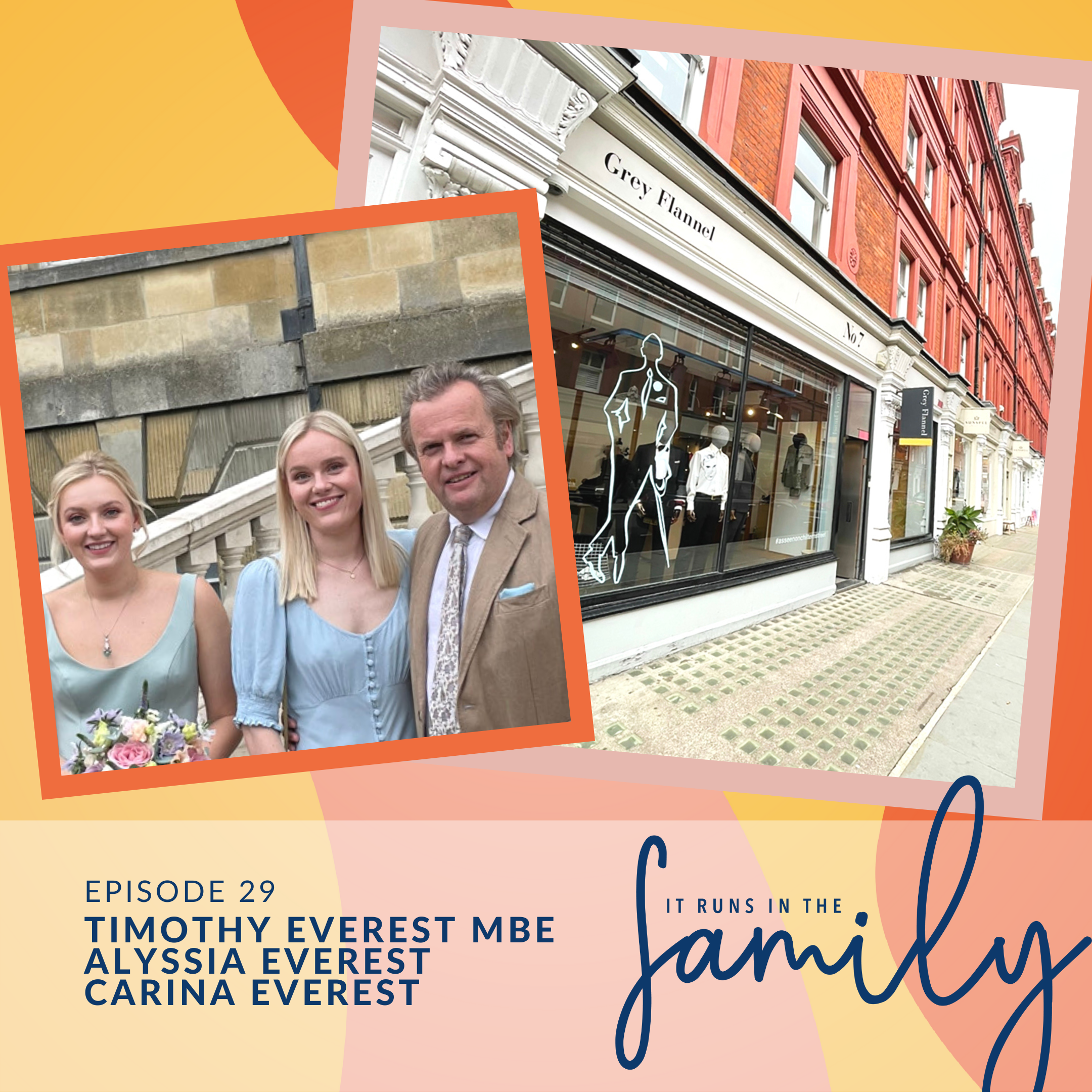 “While I was thinking about starting a business, I left to be a freelance stylist, doing the wardrobe for MTV, for Ridley Scott’s associates, all those big franchise films. Once I was doing that I thought now I was looking at British tailoring in a cool way, and trying to appeal to a new generation that was buying into designer brands. That’s how the business was established.” – 3:35 – Timothy Everest MBE

“The big one we kicked off our film work with was Mission Impossible. We were definitely called in as the fall guy. We were getting some press about being pretty good at what we were doing. It was quite a fraught set, the first one that Tom Cruise had put money into. It was either Prada or DKNY who made the clothes that weren’t fitting. We went on to do quite a few movies with him, including Eyes Wide Shut with Stanley Kubrick.” – 11:20 – Timothy Everest MBE

“As long as you don’t keep failing, then failing is a pretty good thing because you can learn from it.” – 16:45 – Timothy Everest MBE

“What’s been really interesting working in a predominantly menswear business,is that I’ve been popping on a few bits and pieces, then when women come into the shop with their husband and just say ‘Oh that’s really lovely, where did you get that from?’ and I can say that it’s literally just there. I think there’s a real desire to have a beautifully constructed suit, but not make it look overly feminine.” – 27:50 – Alyssia Everest

“There’s always been that creativity in the household. It’s just been a natural thing that’s happened as well, us working together. As Carina said, we’ve gone off, done our own things, and naturally come back.” – 32:45 – Alyssia Everest

“There’s a real shorthand between all of us, and we have very different strengths. I think there’s no hierarchy at all, with a lot of respect for each other.” – 39:34 – Alyssia Everest

“I think having a bit more of an understanding of what other areas of the world are doing is quite nice to be around. Living in Paris has definitely made me smarten up my act because I felt like when I was back in London, I was becoming a bit lazy with my fashion. I had lost that bit of relationship I had with that because clothing is so personal. It’s very much putting on your persona.” – 55:22 – Carina Everest

“It’s common when you speak to people that they’re doing too much. There’s lots we want to do, but we can’t do them all at once, so it’s about doing the right amount.” – 1:08:52  – Timothy Everest MBE