The beauty behind KINN Living is that it’s born from passion, honesty & transparency in a world where sustainability grows in importance and greenwashing becomes more prevalent.

Marie & Sophie started the business with a wonderful, mother-daughter, Co-Founder rapport which helps them to tackle challenges together.

This week on It Runs In The Family, the duo join us to consider the landscape of sustainable cleaning products, the process behind their innovations, and minimising the parental dynamic when making business decisions. 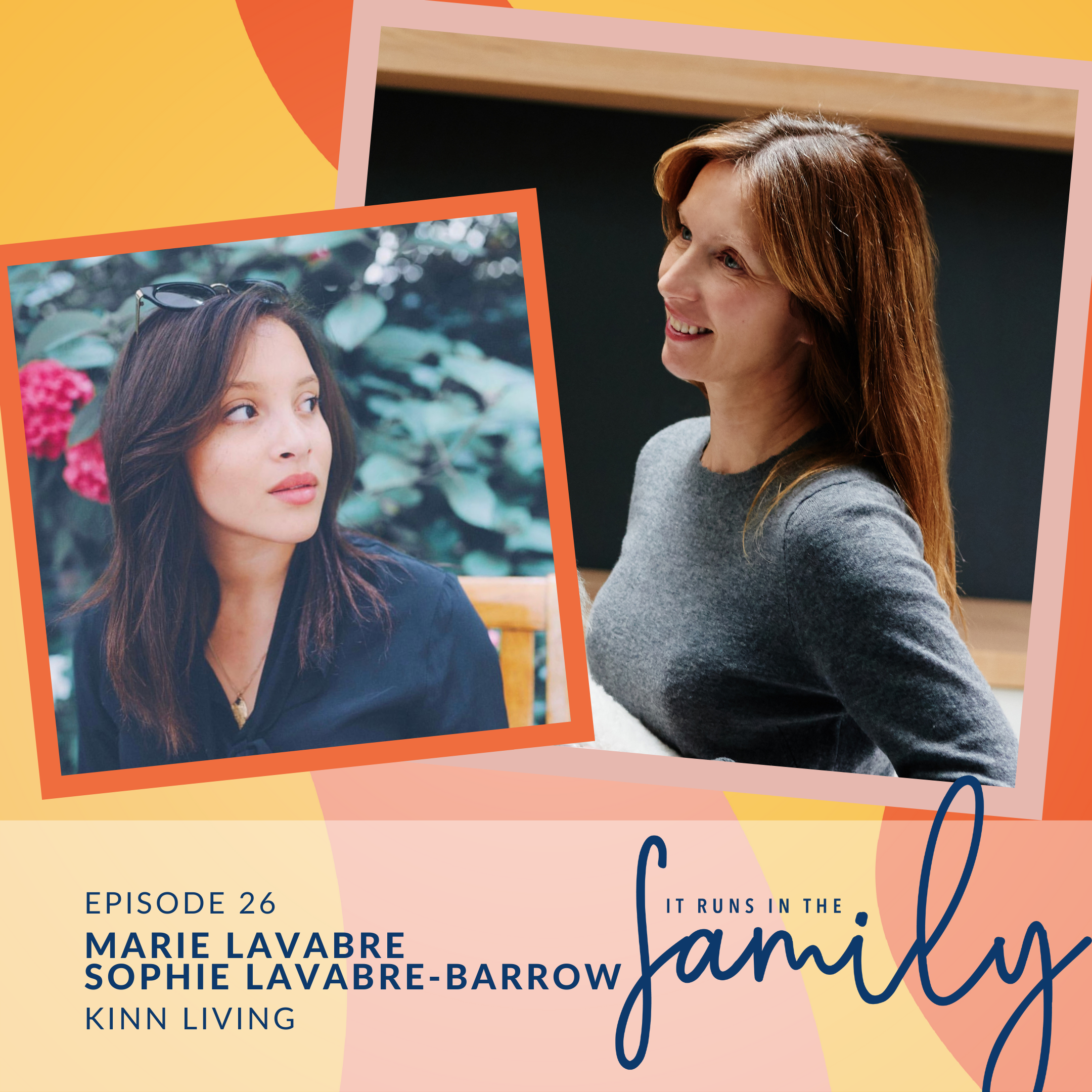 “Starting a business is a big thing. There’s a lot that can go wrong, business partnerships implode all the time. Doing that with a family member makes everything 10 times worse if it goes wrong. But I suppose ultimately, Sophie and I do get on very well. We can be both very strong characters, but we do get on very well. And it was a mad moment one day where I thought, ‘Okay, you’ve beaten me down. This is actually a really good idea. Why don’t we just do it?’” – 8:25 – Marie Lavabre

“I think that growing up with a design element really influences even to this day, everything that I do and think of business-wise, but also on the other element of growing up with an organic lifestyle and being out in the countryside.” – 16:05 – Sophie Lavabre-Barrow

“That’s been one of the hardest dynamics to overcome: me being a mum and Sophie being the daughter at work, because that just can’t work. We have to be equals and we have to be business partners.” – 19:40 – Marie Lavabre

“As interest in sustainability has grown, so too has greenwashing, and it’s something I’m absolutely rabid about. I can’t stand it. It should be illegal because it’s tricking the consumer, which you’re not supposed to do, but apparently everyone gets away with it. But on the whole it’s been great because it’s also been easier to educate people. They’re more open to having this conversation around what we’re using in our home.” – 27:20 – Sophie Lavabre-Barrow

“You see brands go in and out of big stores all the time. A lot of people out there who don’t know how it works from the inside assume it didn’t work, or the brand wasn’t popular enough. Actually it’s just that, like with any business, you chop and change what you’re doing and make decisions that way. So don’t be upset if a big supermarket says no to you the first time, the likelihood is you’ll go back to a different buyer and they’ll say yes the second or third time.” – 38:05 – Sophie Lavabre-Barrow

“My very proud mummy moment was when Sophie phoned me up, absolutely ecstatic, telling me that she’d just been named one of Forbes’ 30 Under 30. I was pretty blown away, because that’s quite a big deal, obviously. There’s been so many great moments, but that really was one of them for me.” – 42:30 – Marie Lavabre

“I think some of our decisions have taken us a bit too long to make with hindsight, and the downside of not doing something is sometimes worse than the downside of having done it and then it doesn’t work anyway, because at least you know sooner rather than later.” – 54:30 – Sophie Lavabre-Barrow

“Communication is even more important when you’re in a family business. You’ve got to be able to communicate. There’s just so much more at risk than just a business – your family relationships and family at the end of the day is the most important thing, so communicate. It’s easier said than done sometimes, but with effort, and sometimes space, it’s just so important.” – 57:00 – Marie Lavabre