Thoughts from The Hut: Gen Z and action against gun violence

Valentine’s Day of 2018 will be remembered in history for the emotions that resonated across the globe. Not those of love and affection, but those of grief and hurt. 17 people lost their lives in the eighth US school shooting this year and looking through the CNN article naming and remembering victims, I feel an immense amount of sadness, especially as the shooter was just a year old than myself. I then start reading other related articles and that feeling is numbed slightly by the actions and determination of the 17 and 18 year olds who are tirelessly campaigning for change.

This is the generation who have grown up with brightly coloured but bullet proof backpacks, have always seen the harsh facts and figures of shootings through their instant access to the internet and where incidents like this are almost considered the norm. Now they are crying out for an end to this devastation.

David Hogg, 17 year old survivor, said “We’re children, you guys are the adults. You need to take some action and play a role. Work together. Come over your politics and get something done.”

Calling out our seniors takes courage, and it is amazing to see these young people, forget the stereotypes us ‘teenagers’ have pinned upon them, and shout out against wrongs (and in doing so, are working to eliminate those labels).

Emma Gonzalez gave a powerful speech challenging not only the gun laws, but America’s attitudes and values towards the weapon. Swallowing back tears, Emma wasn’t afraid to speak from the heart, where she highlighted nothing matters more than working towards prevention.

Although they have been frowned upon for using social media during the shooting, the teens have fought back against this.

David Hogg, who filmed students whilst the school was in lock down, told the New York Times “I recorded those videos because I didn’t know if I was going to survive, but I knew that if those videos survived, they would echo on and tell the story. And that story would be one that would change things, I hoped. And that would be my legacy.”

Sam Zeif shared on Twitter the text conversation with his little brother who was on the same floor as the gunman, insisting he hide until he was safe. Many others shared Snapchat videos from inside the school, it’s hard to believe anyone could watch without wanting to take a stand and make change. This heart-wrenching, raw footage that plays on the heart strings is inevitably going to evoke a response and the ease of sharing on social media allows messages to be communicated quicker. 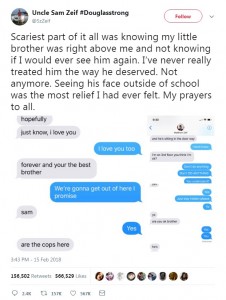