James Cordon set to launch his own Snapchat show

Flying cars could actually exist in three years’ time if journey-sharing app, Uber, gets its way, which says that electric vehicles will take off and land vertically like a helicopter, with zero emissions and minimal noise. Given the current appearance, it’s not quite the futuristic, flashy machine we were expecting to rock while wearing sunnies 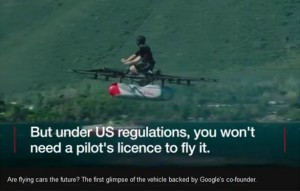