How an egg broke the internet and why we love it

How do you like your eggs in the morning? Scrambled, poached, fried or with the world record number of likes on Instagram and a side of 10m followers?

On January 4th this year, @world_record_egg took to Instagram with a goal to become the most liked post, stealing the title from Forbes youngest billionaire, Kardashian sister, Kylie Jenner, with a record of 18 million likes. It was almost an overnight phenomenon as everyone scrambled together and began to share the post to try and knock her off the top spot.

A week later, Jenner had been beaten and the original egg post has now ranked up an impressive 52,198,988 likes.

Fast-forward a fortnight and another post reveals the egg is beginning to crack. Hinting that there’s possibly more to this egg than we all first knew, the suspense and anticipation begins to rise.

We’ve seen the egg crack a little more every so often until Friday when the egg takes the form of an American Football and TV streaming site Hulu takes ownership of the secret, telling followers: 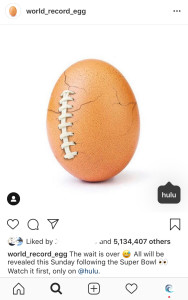 “The wait is over. All will be revealed this Sunday following the Super Bowl. Watch it first, only on @hulu”

What it could be was anyone’s guess, but as of today, it’s fair to say we haven’t been let down.

London based ad-executive, Chris Godfrey, initially started the account to see if an image as simple as an egg, could drum up the same engagement as Kylie Jenner’s picture of her daughters thumb did.

After creating an egg-splosive social media campaign, Godfrey knew he had to make the most of the audience he’d gathered.

Featuring in an advert first aired on Sunday’s Super Bowl, world_record_egg became an advocate for mental health and the pressures that social media puts on us all.

In the video, the egg proclaims that the recent cracks are a result of the pressures of social media. It then goes on to encourage others to talk to each other and links to a new account and website, @the_talking_egg, giving useful information on mental health.

We think this is a l-egg-endary way to utilise the egg’s new found fame and is so relevant to the audience they’ve engaged. Having been shared by millions of young people, and become a hot topic in schools, the egg now carries an important message that everyone, especially young people, need to know.

Having grown up with social media, young people today don’t know any different and therefore it’s sometimes difficult to recognise how social media can impact our wellbeing and mental health. The youngest people on social media are probably still too young to even recognise and understand this.

The once playground trivia of friendship dilemmas, and social pressures are taken online and offer no break for our young people.

A group of girls who excluded you at playtime now follow you home on your iPhone and you see pictures of their after school play dates, heartbroken you’re not there too. The guy, who used to show off at sixth form about his new car and trips abroad, now fills his feed with ‘the good life’, making his mates feel inferior. The people, who don’t feel like they’ll ever be loved because they don’t look like the celebrities on the front of magazines, now see them from every angle on their daily Instagram posts.

Nobody (not even the egg) is invincible and there will always be something that hits a soft spot in all of us, sometimes it can just get a bit too much. @world _record_egg highlights that this is ok, and that it’s definitely ok to talk.

It’s taken such a simple concept and addressed a universal, highly important issue in an audience- friendly, engaging way on a global platform.

I, for one, know that my 15 year old brother shared the post and follows this egg. He was engaged in its rise to fame and as he’s at such a tricky and confusing age, I am thankful that this message has passed on through a channel, he might actually listen to and remember one day.

Chris Godfrey admits the success of the account is a fluke but told the New York Times: “It’s a fluke that caught the world’s attention,” he said. “It’s what you do with that attention that counts.”

As an ad exec it’s a possibility he knew the account would be worth a bit if he achieved his goal, but we think he’s kept this accomplishment sunny side up.

So really we should say; “How the internet broke an egg and why we love it”- but what a fantastic, 21st century, turn of events. Social media done good.