The special event is marked around the world on Tuesday May 23 to raise awareness and promote education on turtles and tortoises and their disappearing habitats across the globe.

Children and their parents or carers can meet a host of creatures at Weymouth SEA LIFE Adventure Park including Sharky, Josie and Gumbo the green sea turtles, Ernest the snapping turtle, and a group of rescued terrapins.

Little children can run around and play in the Turtle Beach sandpit area, before watching the sea turtles have their lunch, alongside sharks, stingrays and tropical fish, during the daily Ocean Tunnel talk and feed at 12.30pm. Visitors can also listen to a more in-depth daily talk about the sea turtles and the injuries that they sustained in the wild in the Ocean Tunnel at 3pm. 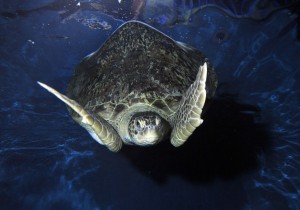 Tamsin Mutton-Mcknight, general manager of the park, said: “All of the staff at Weymouth SEA LIFE Adventure Park are looking forward to celebrating World Turtle Day as we care deeply about the oceans on our planet and the creatures that live both in the sea and on land.

“We would love as many people as possible to come along and meet the turtles which live here at the park and find out more about how we look after them on a daily basis.”

One of the park’s ‘Breed, Rescue, Protect’ ambassadors, Tyler the Turtle, appeared in various locations in Dorset as part of a competition to snap a selfie with him to mark the opening of Carribean Cove. The new play park features a host of climbing structures, slides, tunnels and a Costa Caribbean café for families to enjoy as part of their visit.