Marketing Campaign of the Month: September

A viral social media campaign is something everyone wants to achieve. Creating a sense of intrigue is a great way to go about this, playing on the idea of ‘something is coming’. To carry this out successfully you need to sow small seeds of information gradually, so there is a drip feed of excitement going straight to your target audience – without giving too much away too soon.

You’d be forgiven for not having heard of Southampton ‘horror punk’ band Creeper before now, but their new online campaign leading up to the release of their next album has got fans theorising like nobody’s business. Cat at LLPR, summarises the campaign:

It all began at the end of August, when the band tweeted a missing person image and then launched the website  under character name James Scythe – whereisjamesscythe.co.uk – along with a series of pictures featuring the band members being released to the local media following their performances at the Reading and Leeds festivals. 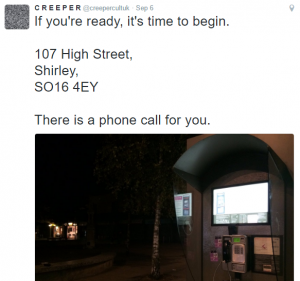 This post was shortly followed with a Southampton-based phone number being released and when calling this line, fans heard lyrics mentioning the date October 2nd. Cryptic clues ensued for followers to decipher; including symbols, evidence bags, and visiting a phone box in the city to begin a scavenger hunt in order to uncover the next clue.

Current theories allude to JM Barrie’s Peter Pan or the Lost Boys, and link back to an earlier story  when the band had an incident at a hotel in room number 309 (where the James Scythe character coincidentally went missing, and the hotel itself is believed to be haunted).

More recent posts show a countdown to October 2nd and fans continue to theorise bringing all the clues together to unravel the meaning behind the campaign and what could happen when the countdown ends.

I’ve seen the band live a few times before now, but never followed them online until this campaign launch and it’s safe to say I’ve been suckered in – I need to know who James Scythe is and how it all ties together!